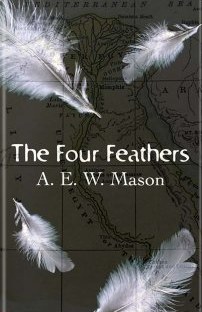 This 1902 adventure novel by British writer A. E. W. Mason has inspired many films of the same title and is considered to be his best work, his "masterpiece". It has been made into movies 5 times and a movie for television once. The novel tells the story of a British officer, Harry Feversham, who resigns from his commission in the East Surrey Regiment just prior to Sir Garnet Wolseley's 1882 expedition to Egypt to suppress the rising of Arabi Pasha. He is faced with censure from three of his comrades, Captain Trench as well as Lieutenants Castleton and Willoughby for cowardice, which is signified by the delivery of three white feathers to him. He loses support of his Irish fiancée, Ethne Eustace, who presents him with the fourth feather of cowardice. His best friend in the regiment, Captain Durrance, becomes his rival for Ethne. The "coward" Feversham redeems himself, feather by feather, with acts of courage, winning back the respect of his colleagues and the heart of the woman he loves.